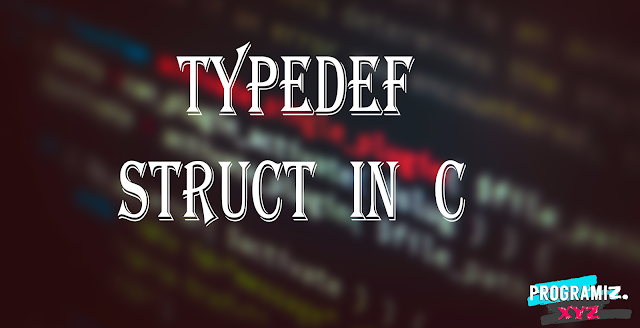 In C there are many built in data types. Sometimes, the built in data types are not enough to perform the required tasks. In that case, some custom data type can be built to meet the necessary requirements. The following are some build in data types in c:
ü  Structure
ü  Union
ü  Typedef
Today we are going to discuss about typedef struct in c. So let’s start—
Typedefs is a way of renaming built in data type (char, int) as well as custom data type(struct, union). It allows us to define types with a different name – which can come in handy when dealing with structs and pointers. typedef makes the code short and improves readability. By the help of typedefwe can get rid of the long definition of a point structure. It is like an alias of struct. It is a keyword which is used to give a new symbolic name for the existing name in a C program
Prototype:

Typedef Structure:
We have a student structure like following

We can typedef it to another name (learner).

Instead of using the struct programiz every time you need to declare struct variable, you can simply use addr, the typedef that we have defined.

We can declare the above variable in two ways.
1st way:

When above code is executed, our output looks like−

We can also use typedef with pointer. In Pointers * binds to the right and not on the left.

Above we are actually declaring x as a pointer of type int, whereas y will be declared as a plain int variable. But if we use typedef, we can declare any number of pointers in a single statement.

typedef vs #define
#define is also used to define the aliases for various data types which is similar to typedef but have some differences −
Examples of how to use #define in a program:

When above code is executed, our output looks like−

If you want to more about structure in c,then just click Here. So, guys, that’s all about typedef struct in c. Later we will discuss another tutorial on c programming. Till then, take care. Happy Coding.